Historical Buildings in the 50s, Use PP-R Pipes and PVC According to Current Needs 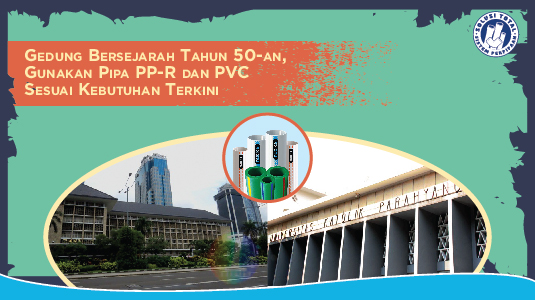 Who doesn’t know the Bank Indonesia Building in Thamrin Jakarta and Parahyangan University in Bandung? Yes, you must be familiar with the names of these two-story buildings, especially the long-standing building in Indonesia has its own history in each city.

The Bank Indonesia building on Jalan Thamrin, whose construction began in 1958, is engaged in banking which has nine floors with a building area of ​​18,000 m². The building, which was built for 4 years, was entrusted by President Soekarno to Frederich Silaban, the architect of the Istiqlal mosque and often found sloping buildings without modern assistance.

Parahyangan University, which was founded in 1955, is engaged in education and was initiated by the leadership of the Indonesian Catholic Church together with the bishops because it saw the need for Indonesians to have higher education after the completion of the independence war in 1949.

Following the development of the era, these two historic buildings in the 50’s have also entrusted the installation of pressurized hot water using the PP-R pipe from Rucika currently named Rucika Kelen Green and also the installation for clean water and sewage using the PVC Rucika Standard pipe. As the most complete total piping system solution in Indonesia, surely Rucika feels proud of the trust given by the developers of these two historic buildings.

Order Rucika’s Products with the DBO Application for Building Shops!